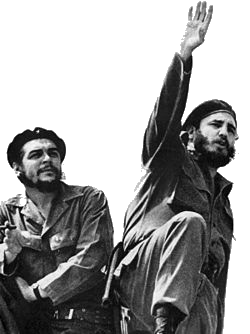 A Message from Our President 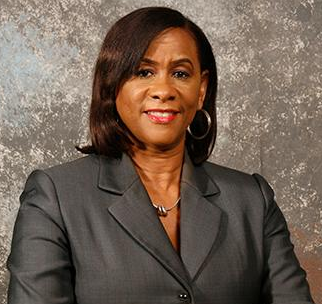 to Humanistic Solidarity Association (Saint Lucia-Cuba).  We hope you will enjoy your journey through our website.

We take this opportunity to thank you for your interest and hope that your viewing experience, and what you have learnt, will encourage you to become a member of the HSA family.

The HSA is affiliated with the Cuban Institute of Friendship with the Peoples (ICAP).  ICAP is a social organisation, founded on 30 December 1960, for the purpose of promoting and explaining to the peoples of the world, the relations of solidarity that sparked the Cuban Revolution in the 1950s.

ICAP is the vehicle reaching around the globe to peoples and countries in solidarity with Cuba, strengthening that network, while representing the Cuban people and delivering a strong message that solidarity not only benefits Cuba, but also the peoples of the world who  promote the idea that a better world for all is actually possible.

Our success rests with our Membership, as we strengthen the ties of friendship between Saint Lucia and Cuba.

Once again, welcome to the HSA. 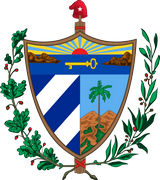 A LETTER FROM OUR CUBAN AMBASSADOR

CUBAN INSTITUTE OF FRIENDSHIP WITH THE PEOPLES (ICAP)

The Humanistic Solidarity Association (Saint Lucia-Cuba) was launched on 28 August 2005 at the Castries Comprehensive Secondary School.

Humanistic Solidarity Association (HSA) is a non-profit organization, involved in activities such as disseminating factual information about Cuba, cultural exchanges between the two countries, excursion visits to Cuba for Saint Lucians and others to better understand Cuban society, assisting Saint Lucians with medical appointments and financial support in Cuba, and securing a number of educational scholarships in various disciplines for needy Saint Lucian students, amongst many other activities.

1. To disseminate factual information about Cuba throughout Saint Lucia and further afield, and to enhance the long and deeply held open and friendly relationship between the populations and Governments of Saint Lucia and Cuba.

3. To explore the development of cultural exchanges between the two countries, with emphasis upon literature and music, and visual, plastic, and performing arts.

4. To work with the world-class Cuban educational system to encourage the development of a science-oriented youth culture in Saint Lucia, to expedite student exchange programmes, and to procure scholarships for the youth of Saint Lucia.

5. To encourage commercial relations between Saint Lucia and Cuba with a view to the development of community-based agricultural co -operatives , environmental management and protection initiatives (including alternative and renewable sources of energy), and other developmental areas as may be agreed by the HSA's Executive.

6. To provide information regarding the origins of the on -going political, economic , and social warfare being waged against Cuba by the political directorate s of Cuba’s enemies.

7. To assist the Government and people of Cuba in any way possible within the scope and ability of the HSA and according to the philosophy and principles of the Association.

Membership is open to all who are interested in championing friendly relations between the peoples of Saint Lucia and Cuba.  There are three classes of membership:

a)  Ordinary Members:  being individuals over the age of 18 years.

c)  Honorary Members:  are individuals who accept membership at the invitation of the Executive, in recognition of their solidarity with the principles and the work of the Association.  An Honorary Member is under no obligation to pay the small HSA annual subscription fee, but may make voluntary donations to the funds or assets of the Association. 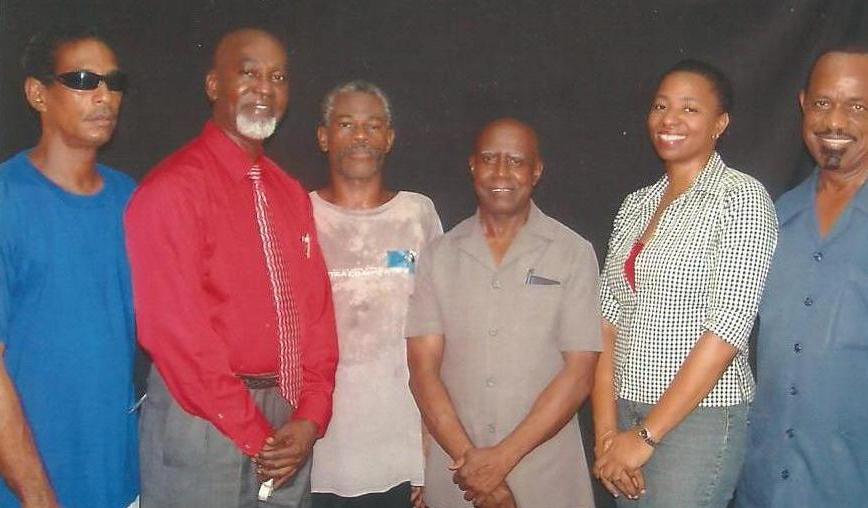 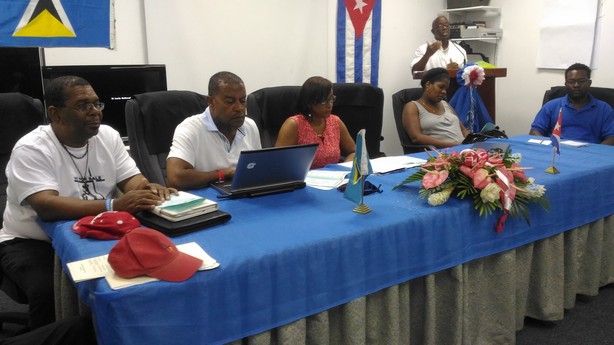 It is with deep sadness and regret that we announce the passing of our dear Brother Maurice Moffat, former Public Relations Director of the HSA.  His sad passing comes as a shock to us all.

A thanksgiving mass for our dear colleague will be held on Friday, 19 August 2022 at  10:00 a.m. at the Saint Joseph the Worker Catholic Church, Gros Islet.  We will also pay a special tribute to Bro. Maurice Moffat at our Biennial General Meeting.

The island of Cuba was inhabited by various Mesoamerican cultures prior to the arrival of the Spanish explorer Christopher Columbus in 1492.  After Columbus' arrival, Cuba became a Spanish colony, ruled by a Spanish governor in Havana.  In 1762, Havana was briefly occupied by Great Britain, before being returned to Spain in exchange for Florida.  A series of rebellions during the 19th century failed to end Spanish rule;  however, the Spanish-American War resulted in a Spanish withdrawal from the island in 1898, and following three-and-a-half years of subsequent US military rule, Cuba gained formal independence in 1902.

In the years following its independence, the Cuban Republic saw significant economic development, but also political corruption and a succession of despotic leaders, culminating in the overthrow of the dictator Fulgencio Batista by the 26th of July Movement, led by Fidel and Raúl Castro Ruz, during the 1953-59 Cuban Revolution.  Cuba has since been governed as a socialist state by the Communist Party under the leadership of the Castro brothers.  The country has been politically and economically isolated by the United States since the Revolution, but has gradually gained access to foreign commerce and travel as efforts to normalise diplomatic relations have progressed.  Domestic economic reforms are also beginning to modernize Cuba's socialist economy.

In 2006, Fidel Castro fell ill and withdrew from public life.  The following year, Raúl Castro became Acting President, replacing his brother as the de facto leader of the country.  In a letter dated 18 February 2008, Fidel Castro announced his formal resignation at the 2008 National Assembly meetings, saying "I will not aspire nor accept-I repeat I will not aspire or accept-the post of President of the Council of State and Commander in Chief."  In the autumn of 2008, Cuba was struck by three separate hurricanes, in the most destructive hurricane season in the country's history;  over 200,000 were left homeless, and over US$5 billion of property damage was caused.  In March 2012, the retired Fidel Castro met Pope Benedict XVI during the latter's visit to Cuba;  the two men discussed the role of the Catholic Church in Cuba, which has a large Catholic community.

As of 2015, Cuba remains one of the few officially socialist states in the world.  Though it remains diplomatically isolated and afflicted by economic inefficiency, major currency reforms were begun in the 2010s, and efforts to free-up domestic private enterprise are now underway.  Living standards in the country have improved significantly since the turmoil of the Special Period, with GDP per capita in terms of purchasing power parity rising from less than US$2,000 in 1999 to nearly $10,000 in 2010.  Tourism has furthermore become a significant source of prosperity for Cuba.

Cuba is a socialist People's Democracy, which holds Marxist principles, and has regional constituencies which nominate a single candidate to make up 605 members of the National Assembly of People's Power.  The National Assembly then elects members from the 605 onto the 31-strong Council of State.  Since the death of Fidel Castro on 25 November 2016, Miguel Diaz-Canel was elected President of the 31-member Council of State after the 11 March 2018 election.

HOMAGE TO THE MEMORY OF FIDEL CASTRO 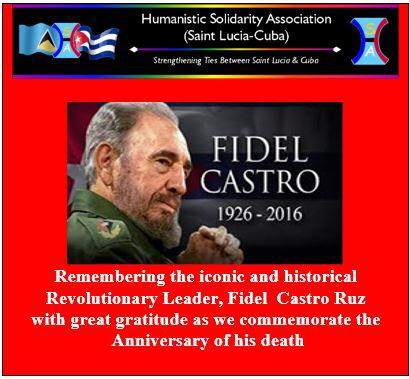 During the Covid-19 pandemic between March 2020 and September 2022, Cuban Excursions and other events and meetings were cancelled.  Now that Covid protocols have been lifted, we are able to resume activities.  Please visit this section regularly to learn what is happening in HSA as it lists calls-to-action and events in Saint Lucia as they relate to Cuba.

HSA supports the totally free and open-source alternative to Zoom, which kept us in touch with our friends and colleagues throughout the pandemic:  https://jitsi.org 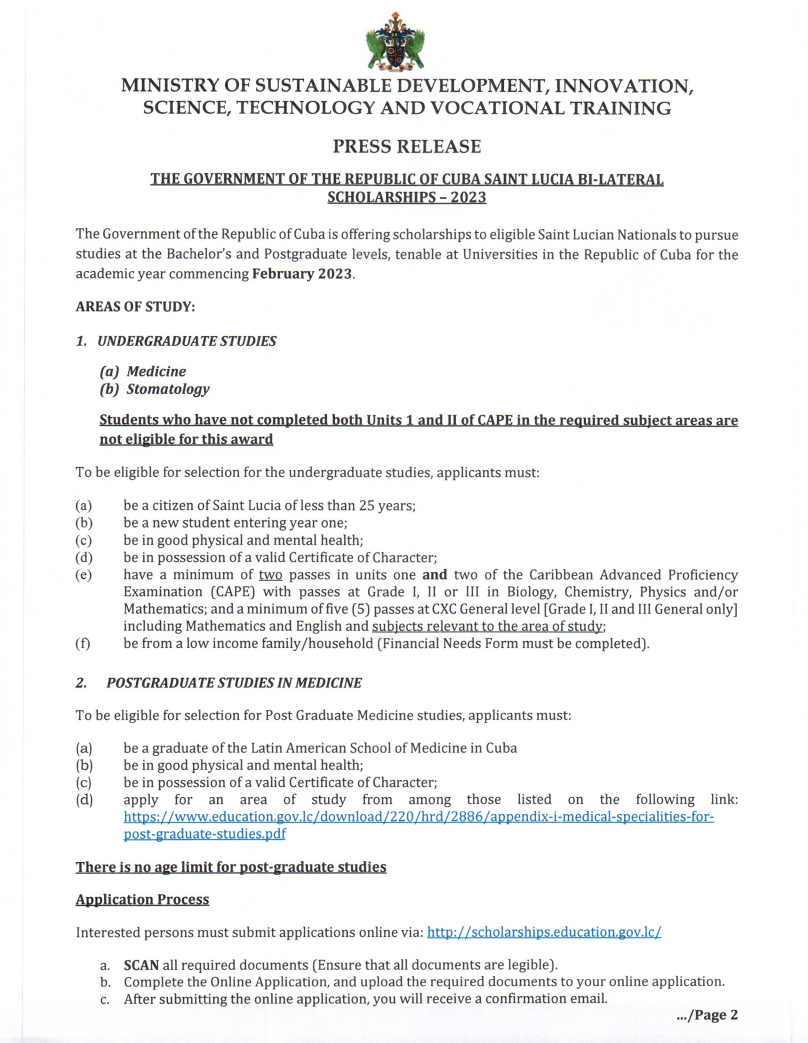 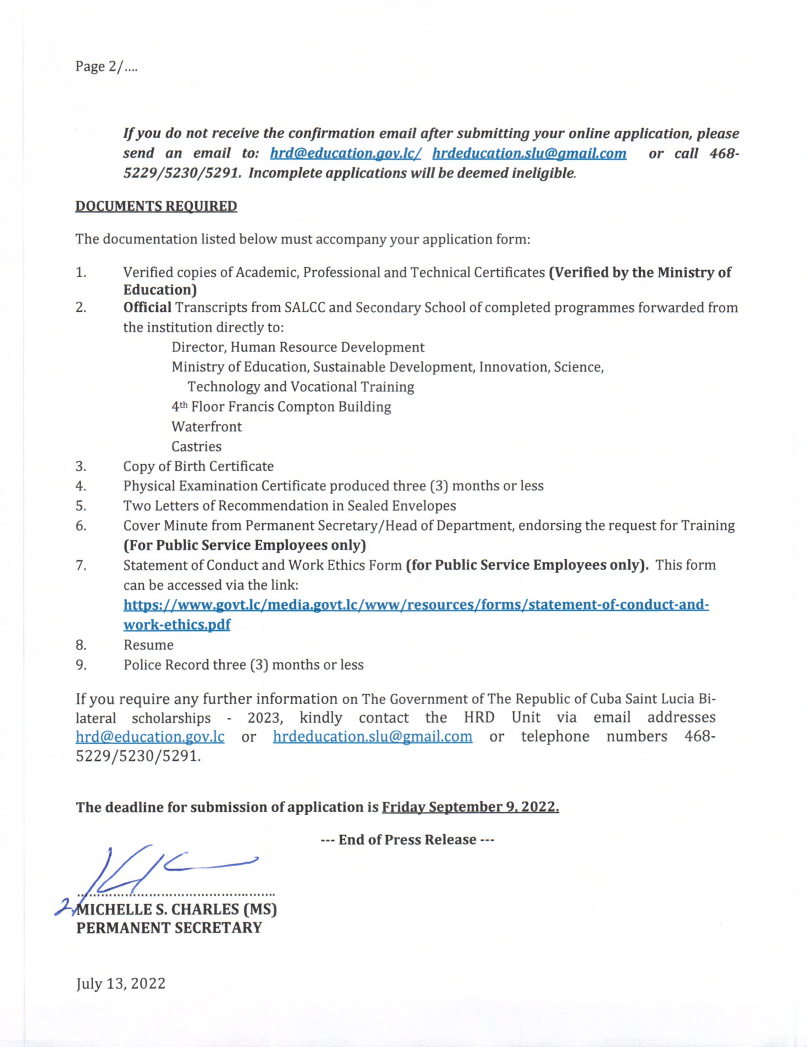 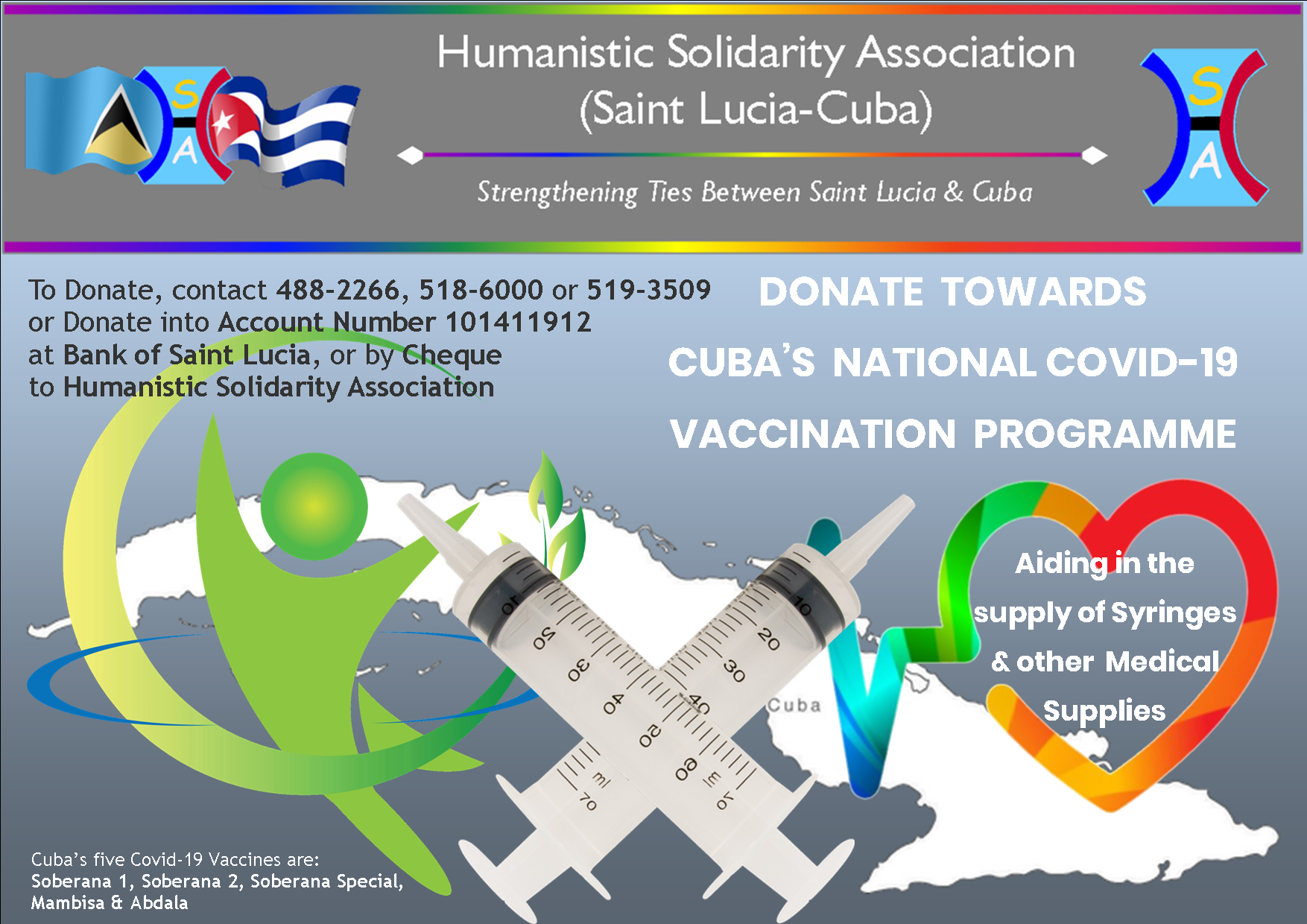 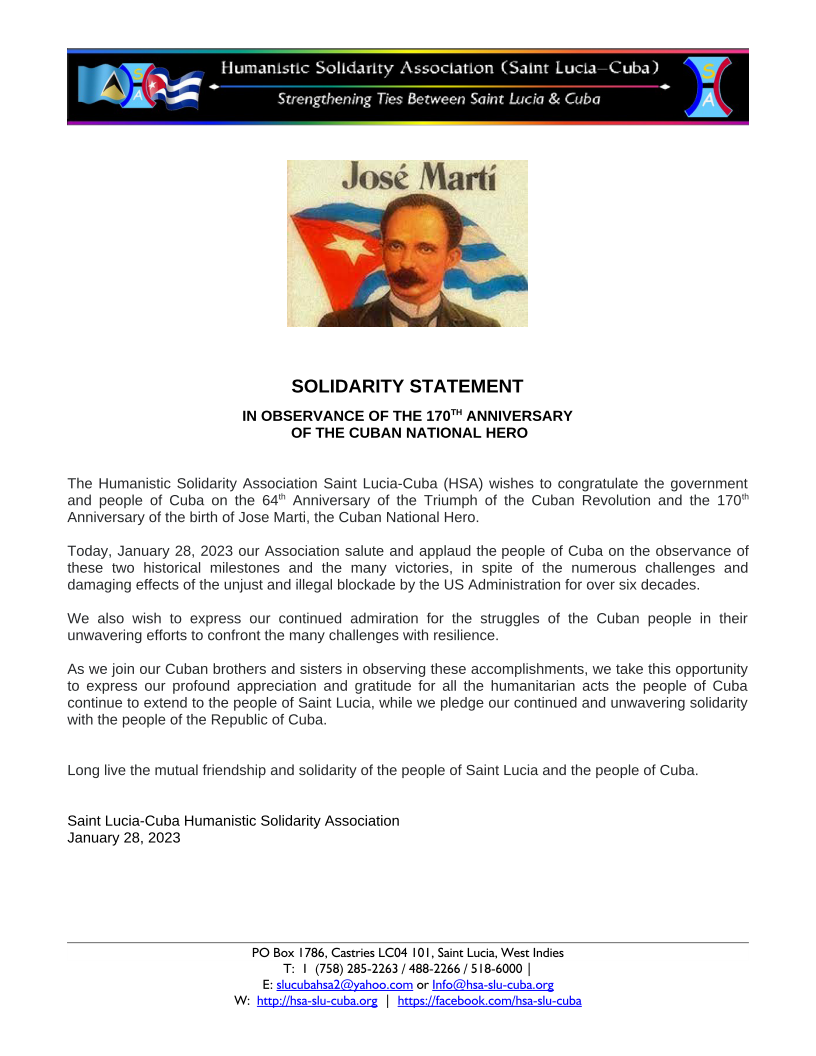 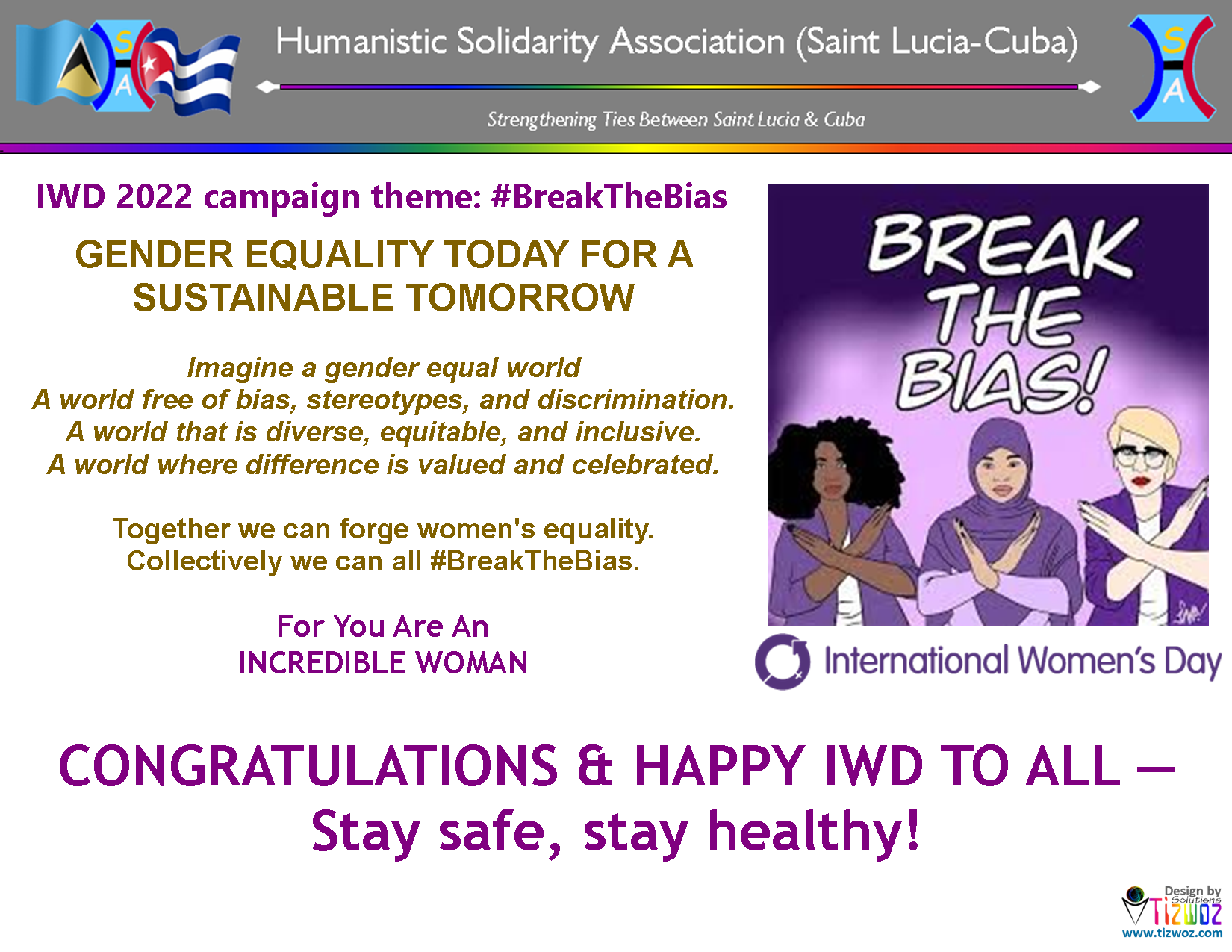 Click here or on Image to Join Zoom Event 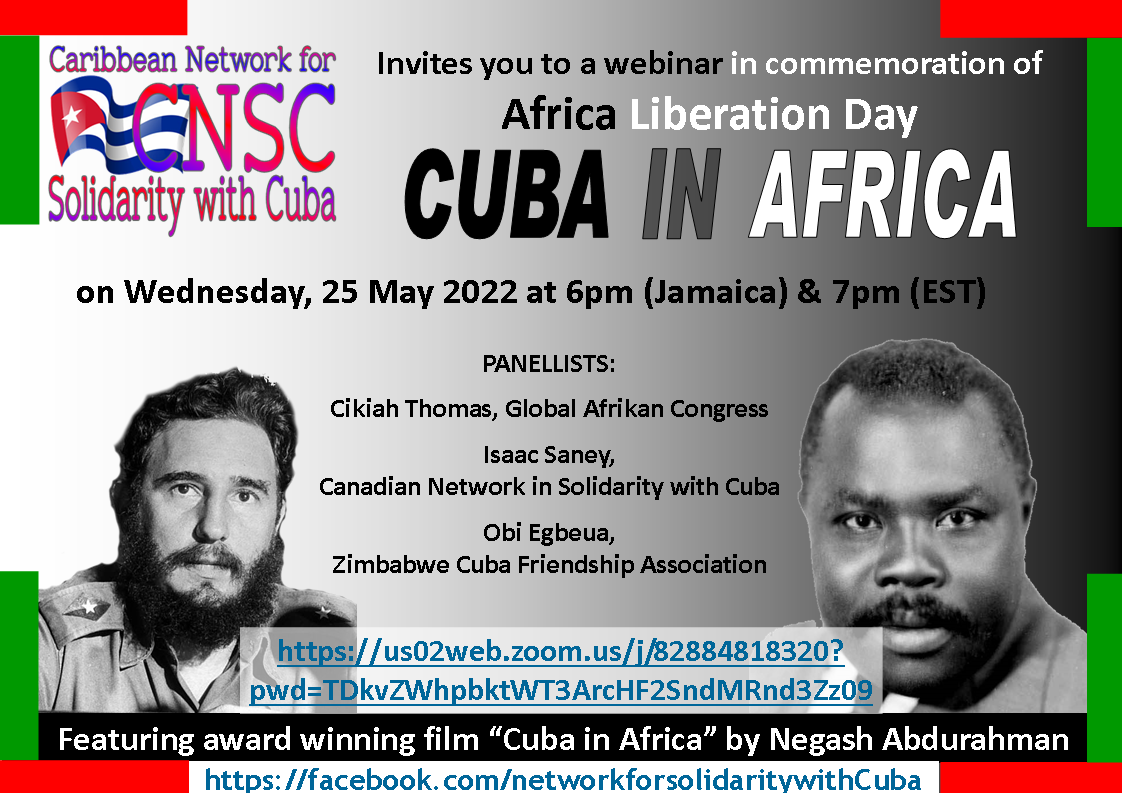 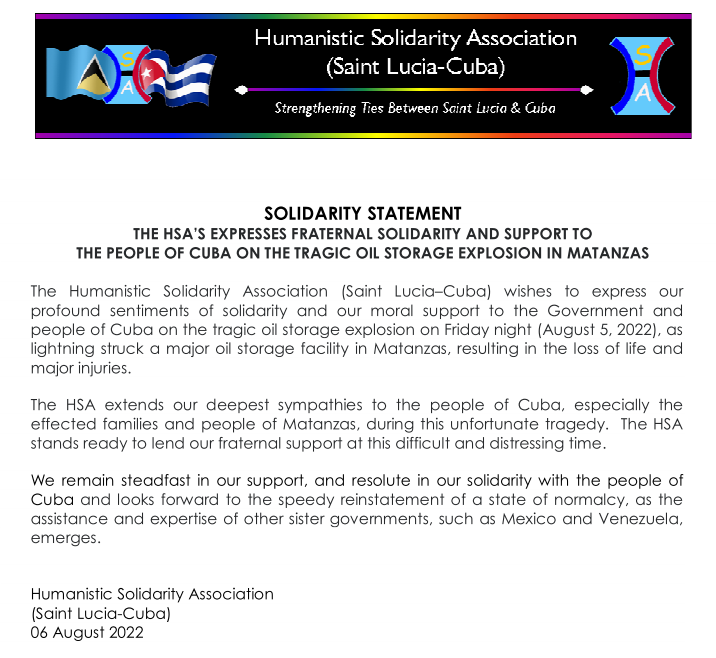 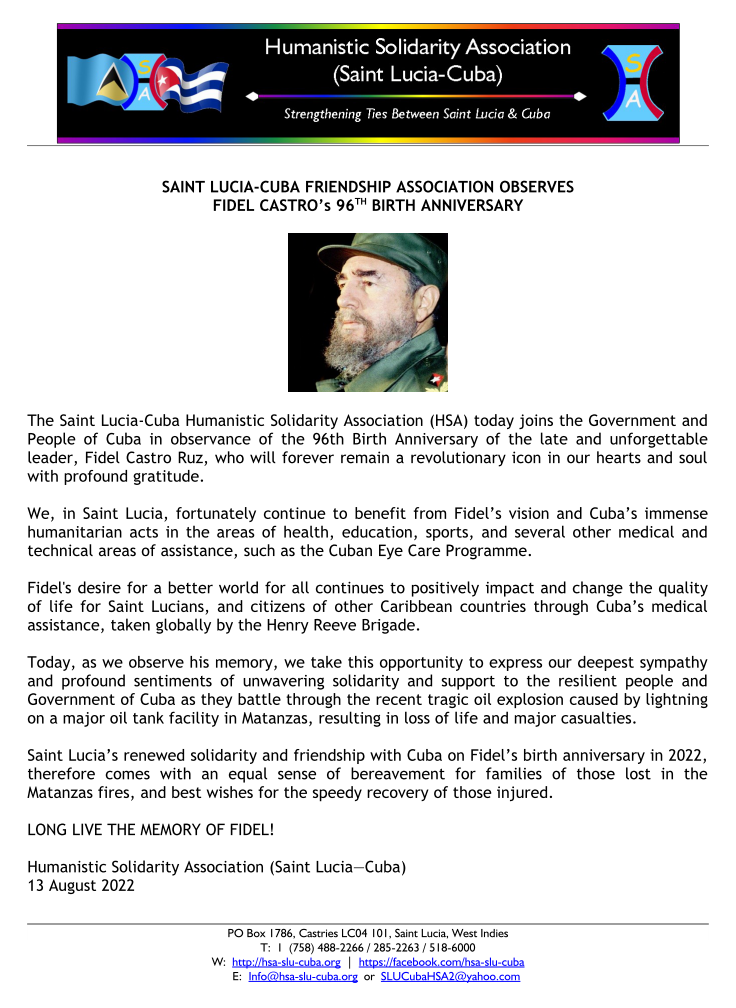 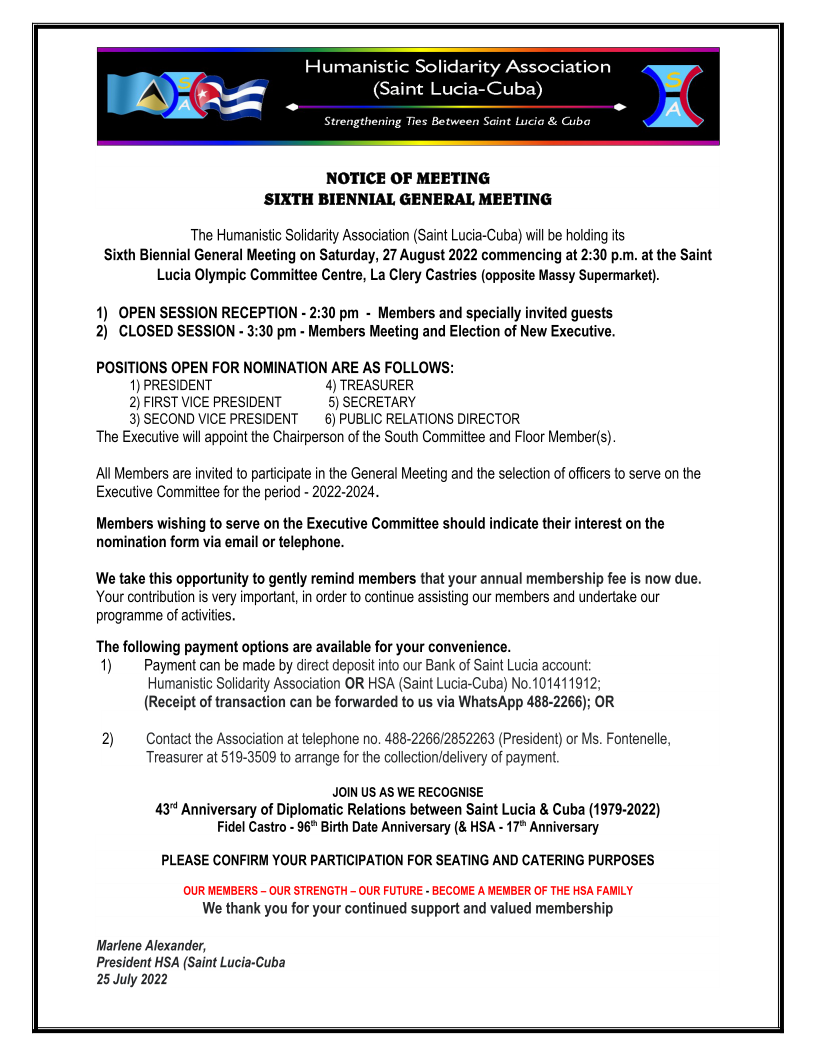 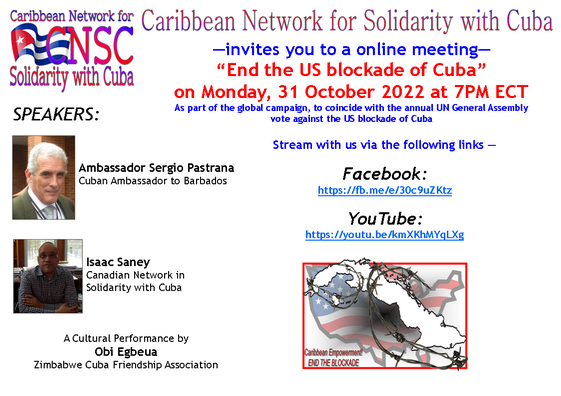 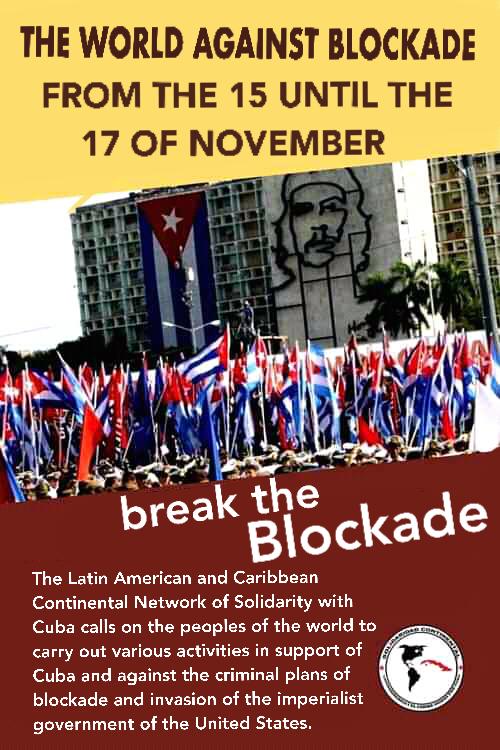 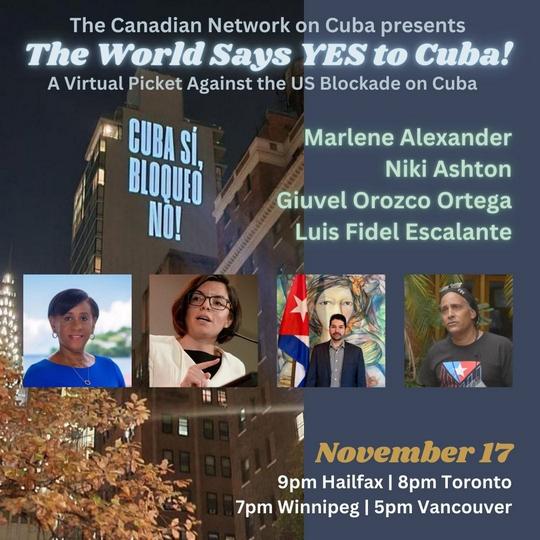 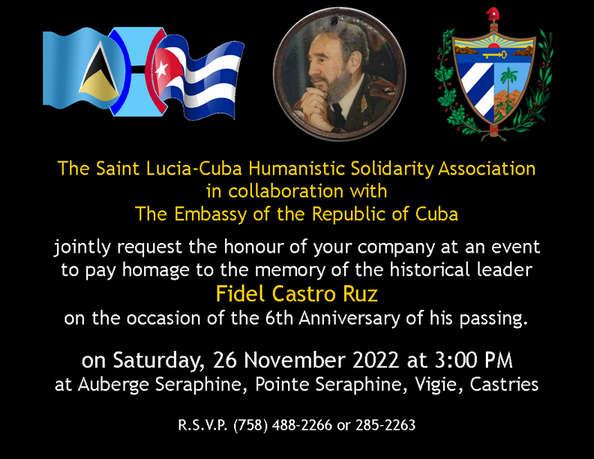 Merry Christmas to All - 25 December 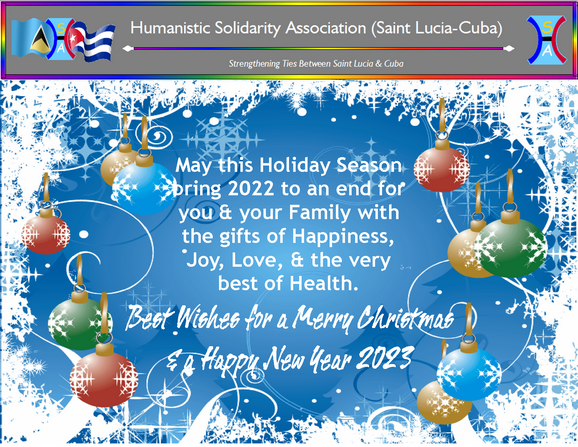 To engender cordial, open, and mutually beneficial relations within the social, cultural, economic, and educational spheres of the peoples of Saint Lucia and Cuba.